What is Eyebrow
Tattooing?

Eyebrow tattooing is where semi-permanent pigment is inserted beneath the top layer of the skin in strokes to mimic the look of eyebrow hairs, the colour of the pigment can vary depending on the desired finish, paler pigments would be used to achieve a natural eyebrow tattoo.

This procedure would be perfect for people who have very pale hair, those that suffer from mild hair loss or Alopecia, as they lack the definition and shape to the face given from fuller brows. Eyebrow tattooing would reduce the hassle of applying makeup every day to give the visual appearance of brows while increase a person’s self-confidence. For any eyebrow treatment it would be beneficial to provide reference imagery for the look that you would like to achieve.

Ombré brows, also known as powder brows, is a cosmetic tattoo technique that involves shading and blending pigment into the skin to create an ombré effect from the beginning of the brow to the end. It starts light from the head of the eyebrow and fades to be darker at the eyebrow tail, giving your brows more definition.

The Ombre Brow treatment will last for about 2 years, individual results will vary depending on the type and condition of your skin as well as how much sun exposure you receive on a regular basis. Different reactions to the tattoo pigment can also affect results. 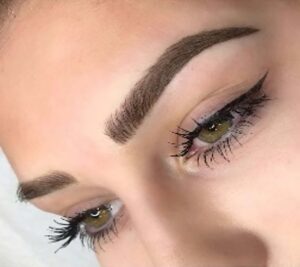 Combination Brows is a crowd-favourite, the results are exactly as you imagine: a combination of microblading and ombre tattoo methods, we pair the two techniques to create a more defined natural brow. The shape is more defined and fuller than Microblading alone, but softer and less dramatic than the Ombre Brow technique. Nano Brow or Nanoblading is a new improvised technique in the world of semi-permanent makeup. It is considered as a more precise version of microblading in beauty industry, this 3D hair stroke technique uses the ultra-sharp nano needle to create a stroke that will mimic a real hair in both diameter and dimension.
The needles are very fine, which is why they can create this natural-looking set of brows.

What Is the Difference Between Microblading and Nanoblading?

• The results of both treatments are natural-looking, but Nano brows, last a relatively long time. The main differences between Microblading and Nano blading are the tools and the technique.

• The biggest difference and main reason why many clients go for Nanoblading over Microblading is the fact that nano needles cause less trauma to the skin than the microblading tool.

• When it comes to Nanoblading vs Microblading pain, the degree of discomfort is individual and depends on the toughness of your skin. But nano brows hurt less than microblading, as the nanoneedle is much thinner. On the other hand, nano needling sessions last longer since each stroke is done individually.

• Results of microblading last up to 18 months and can be prolonged with touch ups and proper aftercare. Microblading also fades significantly faster on oily skin. Nano brows’ results last from 2 to 2.5 years on average, depending on skin type and lifestyle. However, Nanoblading is better suited for oily skin and skin with large pores. Eyebrow Microblading, also known as eyebrow feathering or ‘feather stroke tattooing’ is a growing area of eyebrow styling. It is a semi permanent technique using a hand tool as opposed to more common cosmetic tattooing. The hand tool results in strokes that are incredibly fine, producing a realistic hair effect with a natural look. Microblading will last up to 2 years, with touch ups throughout to maintain the look.

Pigment is applied using a tattoo machine to create a shaded powdery makeup effect to the brows.

Combines the two techniques to apply the pigments, starting with manually shading the brow, with brow strokes tattooed over the top. The technique provides a stronger looking arch and tail.

Nano Brows create Hair strokes for an overall defined and polished look. Needles are very tiny, to create a natural-looking set of brows.

A Full Microblading Brow Set, reduced from full price of $675.

Touch up start from

We recommend speaking to your consultant to identify the best frequency for any touch ups needed, as this will be based on their analysis of your skin.

Book your next appointment

Prior to Eyebrow Tattoo treatment

Leave us your info